Working on a project for my current client I run into the following problem. I had to do some specification reading and create a test project in order to understand it so this is a summary of the findings if someone else runs in to this issue at some point.

During project import I got a warning when Eclipse (actually the JBoss Tools plugin) validated my JPA queries:

According to the error message I’m not allowed to use the input parameter :companyName.

The problem? All our unit- ant integration-tests pass, so it seems to work. The platform is developed targeted at JEE6 (hence, using JPA 2.0) but unfortunately we need to backport to JEE5 for policy-reasons (enterprise decision that the chosen application server is not mature enough in the version supporting JEE6). Backporting means running on a JPA 1.0-based platform so this might change the behavior.

What does the specification say?

Let’s take a look in the specification documents delivered by the JCP:

Seems obvious enogh – according to spec. I can not use it in the update query.

Seems obvious enough again – according to spec. I can not use it in the update query.

Aha! This is a difference – according to this spec. we are allowed to use it as values in update queries.

A test project to validate this

In order to find out how it behaves in reality I created a test project where I could switch between JPA 2 and JPA 1. I used Hibernate-Entitymanger as the persistence provider so the findings are only valid for Hibernate – another provider might have a different behavior.

Using the lastest Hibernate-Entitymanger (4.1.5.SP1) I tested an update query on the form above.

It works even though it is not supposed to work according to specification.

Using Hibernate-Entitymanager (3.4.0.GA), which is the last version to support JPA 1 but not JPA 2, I run the sam code.

It works even though it is not supposed to work according to specification.

Hibernate does not follow the specification on this point but one might guess that the new version of the JPA-spec will allow this behavior as indicated by the draft JSR. JBoss Tools is probably validating the query against the JPQL-grammar which is based on the specification and is therefore showing a validation error.

After a discussion in out team we decided to keep the current implementation despite the breach of specification. Changing the behavior would mean string concatenation or string substitution to build the query and the current approach is much cleaner. As we see no indications of a shift in persistence provider or application server at this stage we believe the gains of keeping the code are larger than the risks at this point. 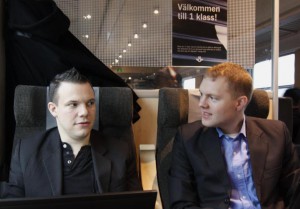 Today I have had the honor to give a presentation on Chalmers University of  Technology on behalf of EWB Gothenburg. During 45 minutes I had the opportunity to give my view of technology as tool to build a better world. My presentation was titled “Frog leap technology: How access to knowledge levels the plane field for developing countries”. My main argument is that development is a non-linear process and that high tech is of great benefit for developing countries as a mean of development.

The full presentation can be found here: Frog leap technology

For convenience, this is the websites referred to in the presentation.

Clouds on the move…

It appears that cloud services are increasing. Now, Sun is also in the battle for the cloud-users. Sun do have a very big advantage – the name : “Behind every Cloud, You’ll see the Sun” 🙂

So far it seems to be no public sign-up but there is an information-registration form for those who are curious. Remains to be seen whether I will get an evaluation account soon. One thing that is interesting is Sun’s target groups:

Use the Cloud– best option for startups, research projects, or Web 2.0 developers who want a simple, low-cost way to “load and go.”

Leverage the Cloud– alternative for existing enterprises to offload overburdened IT infrastructures.

Build the Cloud– many large enterprises are experimenting with developing private clouds and standards.

Options one and two are pretty straightforward. But option three is interesting for large companies may (or equiv.) who do not trust the public clouds, but still want to take advantage of a cloud infrastructure. Finally, there also seems as if Sun wants to take a piece of service provider cake by offering infrastructure for application development (Web2.0 applications, Facebook apps, etc.).

What makes the initiative even more exciting is that Sun is already working with Amazon in the sense that they offer Open Solaris-ami: s using EC2. They will in some sense to compete with themselves. Exiting times ahead.

The price level is common for most of the providers. It’s an ‘expensive’ market in the sense that the operators share of the total price is quite large. In general the providers take about a third of the revenue. It might be fair but there is a trick – it’s the mandatory 50-öres (~5 cent)  confirmation SMS being sent.

For a premium-SMS on 1 SEK (1 SEK = 100 öre)  the provider will take a about 33 öre in revenue share (including tax). Then the confirmation SMS is 50 öre (62,5 öre inc tax). The remaining revenue will be 100-33-62,5 = 4,5 öre. The conclusion is that for small payments the model is not working and it basically invalidates the use of premium-SMS as micro payment system.

The investigation lead to one good thing though – a list of companies providing these services:

Note that the above list is by no means complete. It is also completely un-ordered and is only meant as a starting point to compare different providers.